Information about the awardees 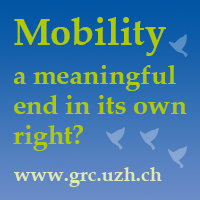 Take look at the beautiful pictures in our  picture gallery!

Looking back on the GRC Annual Ceremony 2016

On the occasion of the Annual Ceremony, Graduate Campus organized a panel discussion on mobility in academia. Many came to hear convincing arguments for extensive mobility as well as a lot of critical thoughts.

We are pleased that Swiss Radio and Television (SRF 4) decided to feature the debate in its show Echo der Zeit. This way, you can listen to our speakers and read a summary (in German language), especially if you missed the event.

The Mercator Awards 2016 were presented to three outstanding young researchers during the second part of the Annual Ceremony. We portrayed two of them in short films, in which they explain their research. These interesting and original films make their complex scientific achievements accessible to all. The film on Sarah Genner, a media researcher, can be viewed on the NZZ campus website (in German and English language). The film on Uli Herrmann, a neuropathologist, has been published in German and English language via UZH News.

UZH News published a comprehensive article on the event (in German language).

To look back on GRC Annual Ceremony 2016, we invite you to listen to the radio broadcast, read the articles, watch the films - and last but not least look at the beautiful pictures in our  picture gallery. Enjoy!